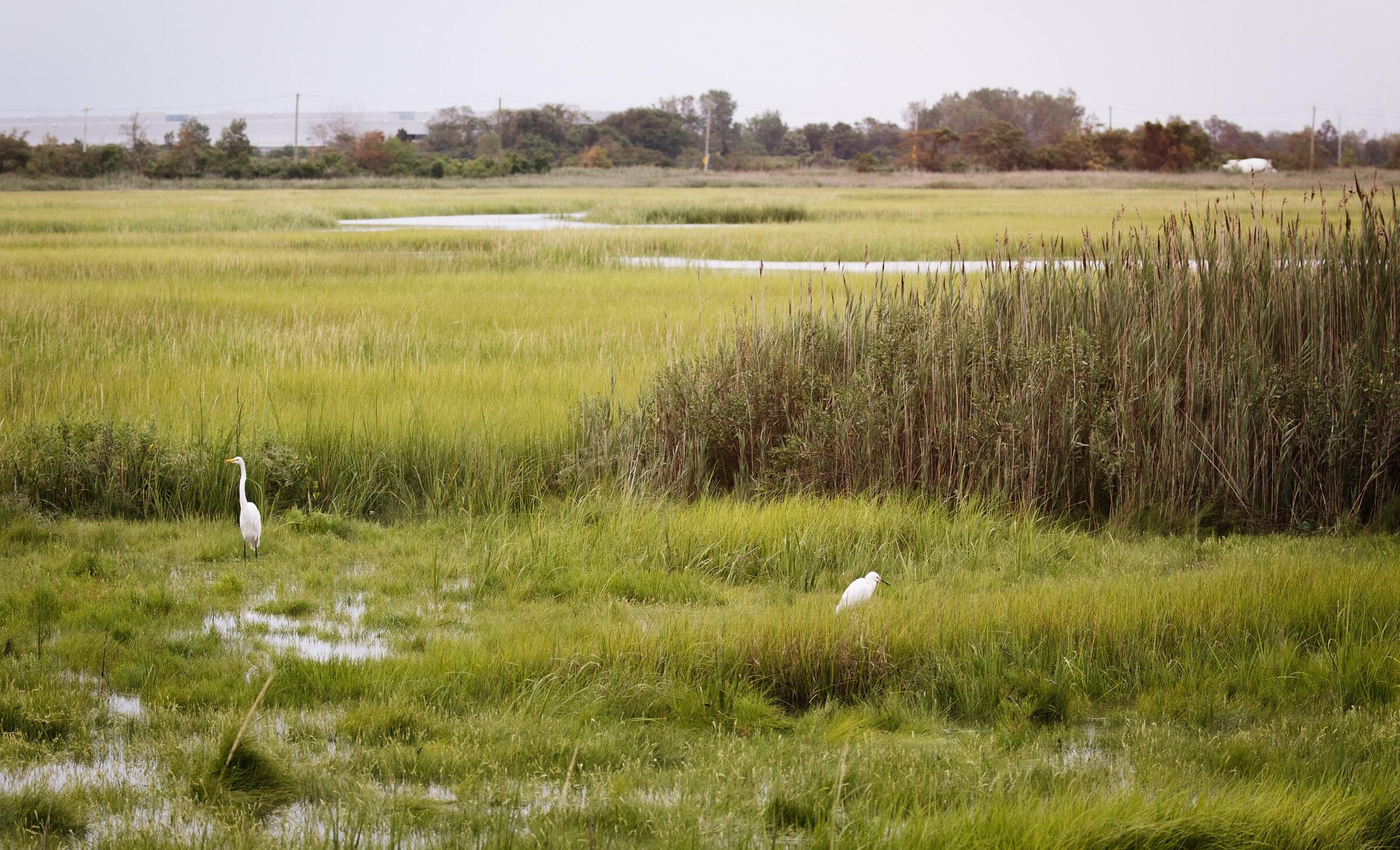 Did you know that salt marshes have suffered losses of over 75% between 1900 and 1970 and continue to decline at rates of 0.5 to 3% per year*? These staggering statistics are having a grave impact on the Saltmarsh Sparrow population, and putting local communities and homes at risk as well.

The map above shows the priority areas for saltmarsh restoration and/or enhancement in Connecticut and New York, as identified by the Long Island Sound Area conservation strategy. The stars indicate active work areas. Click here to learn more about projects underway in Connecticut.

Audubon New York and partners are focusing on new projects to improve coastal resiliency at the following salt marsh sites:

Idlewild is one of only three sites in NYC to provide significant Saltmarsh Sparrow nesting habitat. Unfortunately, historic ditching and filling, high nutrient loads, debris, and increased inundation have significantly degraded this marsh.

In collaboration with NYC Parks, the lead organization on this project, Audubon's work will enhance existing marsh habitat by applying a thin layer of clean sediment and new plantings of Spartina alterniflora and Spartina patens to increase surface elevations, addressing multiple causes of marsh degradation.

Located northeast of John F. Kennedy International Airport in the Brookville/Rosedale neighborhoods of southeastern Queens, NYC, the park includes 160 acres of freshwater and tidal wetlands, woodland, meadow, and grassland dune-scrub habitat, and the largest remaining saltwater marsh in Queens. It is also an important recreational and green space resource for local urban residents: approximately 2.3 million people live in Queens, the fourth most densely populated county in the U.S. and the most ethnically diverse urban area in the world.

This effort will bring the skills and expertise of Audubon and SUNY College of Environmental Science and Forestry to expand a shovel-ready project, then share results and best practices to facilitate more restoration projects across the region.

The area is home to almost 13,000 residents, 4,000 households, and 150 commercial properties, located on the South Shore of Long Island in Suffolk County, New York in the southern portion of the Town of Brookhaven.

Its current state, the Mastic Beach/Shirley peninsula is degraded due to residential development, roadways, septic systems, and stormwater runoff. The entire waterfront edge of the peninsula is surrounded by Riviera Drive, itself an unpaved road that requires constant maintenance due to its low elevation and proximity to the water’s edge.

Due to the road being slightly higher than the surrounding landscape, Riviera Drive prevents tide waters from flowing back to the Bay in a natural manner, causing extensive pockets of standing water to form in the interior portions of the Mastic Beach peninsula. Riviera Drive causes similar issues during rainfall events as stormwater that flows from the northern, upland areas of Mastic Beach is not able to efficiently drain into the Bay.

In addition to ongoing impacts from development, the area was severely impacted by flooding during Superstorm Sandy in 2012 and has continued to experience tidal, storm surge, and rainfall flooding related to rising sea levels and increases in extreme weather due to climate change.

The current project will remove three segments (3,790 linear feet) of existing roadway in Mastic Beach, NY and restore the area to native coastal marsh habitat by planting and stewarding area-appropriate marsh grasses and shrubs and monitoring the impact of restoration efforts on birds and vegetation.

This project is a small portion of the larger restoration of the 147-acre area and a continued partnership with the Town of Brookhaven and the Ramboll Group. It is supported by a 2018 NFWF National Coastal Resilience Fund grant. Efforts to design and fund the full restoration are currently underway.

Sunken Meadow State Park’s tidal marsh complex is located west of the mouth of the Nisseqogue River and is part of a nearly 400-acre tidal marsh complex that is mapped as statewide significant (NYNHP 2021b). The project site has approximately 78 acres of salt marsh, including 9 acres of high marsh habitat (ACJV).

Since the 1950s, tidal restriction has degraded the habitat by restricting fish passage and promoting invasive Phragmites australis growth. NYS Parks, Save the Sound, and other partners have been working to improve salt marsh habitat over the last decade.

After years of work to design and plan to remove an earthen berm, Hurricane Sandy breached the berm, leading to restored tidal flow to 135 acres of tidal wetland habitat. Since then, Save the Sound and partners have restored 3.5 acres of degraded low marsh habitat by removing invasive Phragmites australis and planting four acres of native marsh vegetation within Sunken Meadow State Park. Save the Sound also constructed two large storm water management ponds within a degraded parking lot to reduce runoff of pollutants and freshwater, further enhancing the assessment area.

The primary goal of this project is to increase the resiliency of salt marsh habitat, particularly high marsh habitat, which the Saltmarsh Sparrow depends on. We will conduct a Site Assessment and Preliminary Design project within an 83-acre area of the Sunken Meadow tidal marsh complex, ultimately designing a restoration project that targets high marsh and the needs of this rapidly declining bird species.

This project is supported by a grant from National Fish and Wildlife Foundation's Long Island Sound Futures Fund.