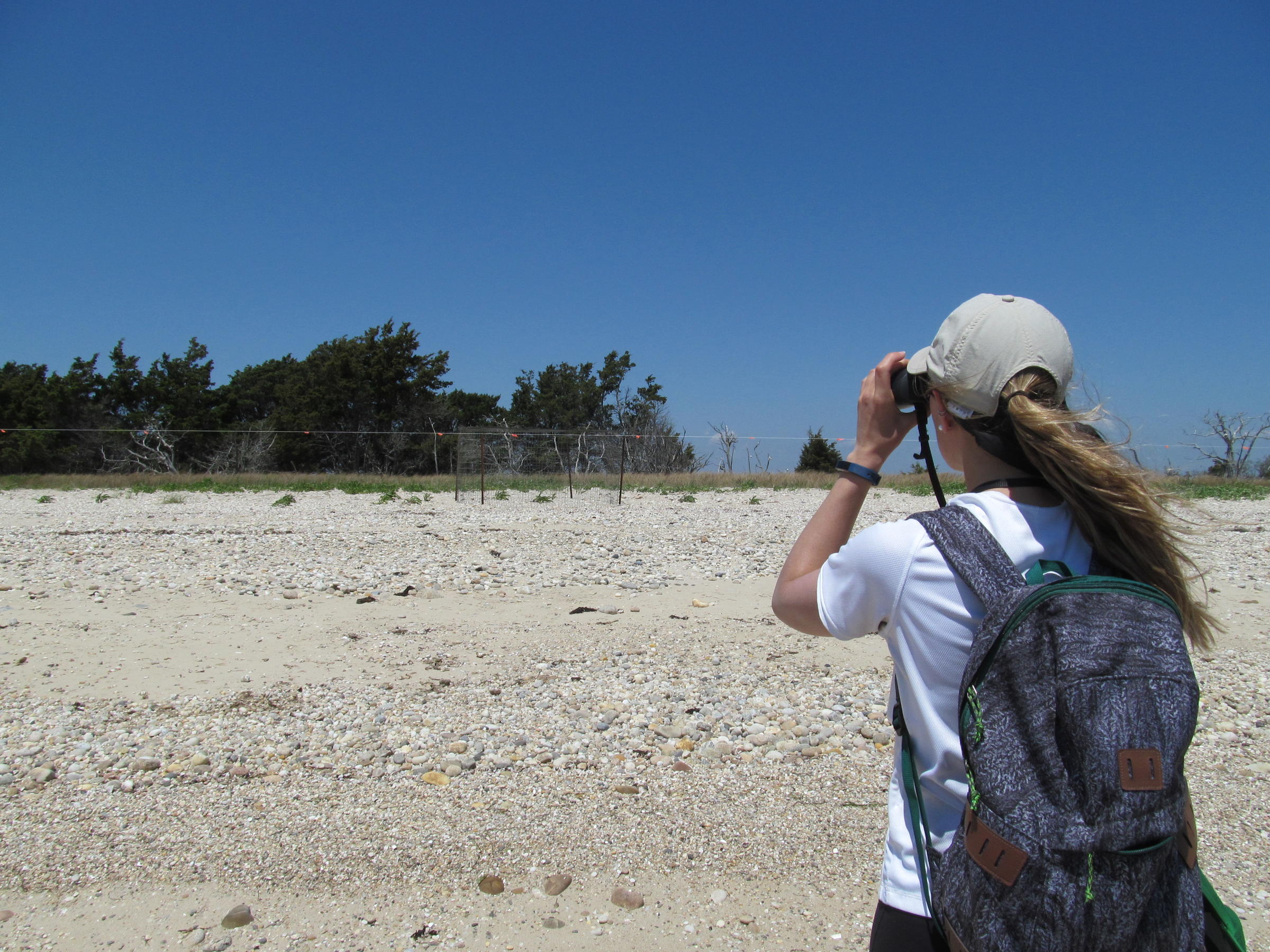 After the Women in Conservation Luncheon in New York City, I was inspired to interview and highlight the work that my co-workers, both women in conservation, are a part of.

Each spring, Audubon New York hires seasonal employees to work on the Long Island Bird Conservation Program. This year, Lindsey DeLuna and Alyssa Lefebvre have both been hired as shorebird technicians, and Lindsey has the additional distinction of being the 2017 Rachel Carson Field Intern. Both are tasked with monitoring and stewarding shorebirds like the Piping Plover and American Oystercatcher. The seasonal nature of the job corresponds to the life history of the birds. They are migratory, wintering in places like Texas, Florida, and the Bahamas; and breeding along the sandy shores of the Atlantic coast. Various threats such as development, beach recreation, predation, and weather events make the breeding stage for shorebirds particularly vulnerable. Stewardship, monitoring, and educating the public about these birds is essential to their survival.

Both Alyssa and Lindsey started work in early April setting up symbolic fencing, which marks off nesting habitat for shorebirds. Fencing provides areas where people can’t disturb birds or accidentally step on well-camouflaged eggs. Setting up these areas requires staff to haul heavy equipment to the beach and pound steel posts in the sand by hand. Monitoring involves walking long distances on rocky or sandy shores in sometimes rainy and cold conditions in early spring and hot and humid conditions in the summer. It is physically and mentally demanding work that also requires patience to observe birds. Later in the season, after marking locations of pairs and nests, technicians document hatching and fledging success of chicks. Information recorded for the Piping Plover, a federally threatened species, is submitted to the U.S. Fish and Wildlife Service where it is compiled to evaluate recovery goals under the Endangered Species Act. Other aspects of the job include assessing predation pressure and human disturbance, collaborating with volunteers and land managers, keeping detailed records, and adding symbolic fencing and predator exclosures where necessary. This is just a snapshot of the work that Audubon New York’s field technicians undertake each season.

Both Lindsey and Alyssa are intelligent, enthusiastic young women who love their jobs and working outdoors. I took a day with each of them to assist with their monitoring and stewardship efforts and to talk with them about their work. It wasn’t a coincidence that I chose to go out in the field when weather predictions said clear, sunny, and warm! Below are excerpts from my interviews with them.

Click here to see a slideshow of my day in the field.

Lindsey works on the South shore of Long Island; her sites are Atlantic Ocean beaches on barrier islands. She primarily monitors American Oystercatchers. As of May 22, she has documented 51 nesting pairs at her sites, and a handful have hatched. Oystercatchers are striking vibrant birds that make nests in shallow depressions above the high tide line, sometimes within the dunes. They can also be quite noisy. Lindsey describes them as odd looking and quirky.

Working with Audubon is the second job she’s had in the field of shorebird conservation. Previously, she worked as a technician on the north shore of Long Island with New York State Parks and Recreation. That site was on a smaller scale, and she mainly monitored Piping Plovers and Least Terns. She is covering a lot more ground on the South Shore and is getting experience working with a different species. Her inspiration to be in the field of conservation started in her second year of college when she took an introductory biology course with a focus in ecology. Her ornithology course also played a role; it made her more observant and it was eye-opening to learn about the diversity of birds.

Here is my 10-minutes with Lindsey:

What motivates you every day to do this kind of work? A sense of responsibility. There is so much wrong with the way people interact with the natural environment. I want to be the person that is aware. The birds motivate you; they are so helpless. Since implementing these programs the birds are doing better.

What are the challenges about this job? When you lose a nest [when a nest gets predated or lost due to weather], you take it personally. You feel responsible, but also have to understand that it happens.

Describe how you feel or the thoughts that go through your mind when you step out onto the beach every morning. How productive the beach is. I grew up on Long Island, and I used to think the beach was where we went to recreate. Now I take notice of life that is dependent on the beach and that there is so much work being done to conserve it.

What are some goals you have for the future personally and professionally? Do you have a dream job? I don’t have something specific- but would like to work in bird conservation. They are a good spotlight species that if you conserve them, you’re conserving a lot of other species as well. Research would be cool, and I am open to traveling out of New York. I definitely want to do field work and I would also like to visit all of the national parks.

This is the middle of the field season. What are your expectations or goals for the remainder of this experience and what do you hope to gain? I am looking forward to banding birds to gain experience with handling the birds. I hope to be able to learn how to safely attach bands.

What advice would you give to a young person wanting to have a career in conservation? Get involved in small scale conservation work in your local area during school or summer. Seek out those opportunities before you graduate.

Do you have a motto or phrase that you live by? What comes to mind is “Don’t sweat the small stuff.” Just try not to get caught up in the things that don’t matter in the grand scheme of things.

Alyssa works on the rockier north shores of Long Island at several small sites in Nassau County and one site far east on the North Fork. As of May 24, she has documented 13 pairs of Piping Plovers and 10 nests. Hatching has not yet begun. Piping Plovers are the management focus of many coastal beaches along the Atlantic Ocean. They are small camouflaged birds that nest in shallow scrapes sometimes lined with shells or pebbles. They eat marine worms and other insects.

Alyssa previously worked as a naturalist for the Indian River Lagoon in Florida. She describes that region as a must see destination of the state since it comprises about 40% of Florida’s east coast and boasts a plentiful diverse array of plant and animal species. She led educational programs that involved seining and identifying organisms in the lagoon. She was also involved in water quality testing for a larger study, since the area suffers from issues with runoff. As an undergraduate, she did research on glass eels, the invasive lionfish, and substrates for oyster larvae. She is most passionate about eradicating plastic from the world’s oceans.

Here is my 10-minutes with Alyssa:

What is the most important thing you have learned so far from this experience? Research isn’t easy! It is very real and being a part of it is exciting. I have respect for the Endangered Species Act, researchers, and people working very hard on behalf of the birds. I learned that it is a slow process.

What are some negative things you’ve experienced during this job? The number of complaints I receive from beachgoers. Because I’m here, people come to me with complaints, mainly about laws that are out of my control. The marine debris is especially hard to see. There is too much- it is hard to walk by and to see animals trying to forage around it. There are thousands of pieces of mystery plastic I can’t pick up. I am trying not to become numb to it, so I don’t just walk by a big piece that I can easily pick up, but sometimes my hands are tied.

What are some goals you have for the future personally and professionally? Do you have a dream job? I think about that a lot, because I am at that time in my life. It would be a dream to have alternative products made out of materials other than plastic like biodegradable bamboo straws. It would be great to have those choices, so that I am not constantly worried about the amount of plastic waste I might be creating. I would like to have a career involving marine debris research or something like a policy or consumer advocate. Researching the pacific garbage patch is something that interests me. [Alyssa is adamant about reducing her plastic use. She always reminds food service workers that she doesn’t need a straw or plastic cutlery. She also uses a reusable water bottle and coffee cup, and opts for glass containers].

Say you were reincarnated as an animal, what would you want to be reincarnated as and why? I would love to be a Great White Shark or a Mako Shark. Let’s go with Mako Shark- they are the fastest sea creatures and gnarly looking, but are actually super docile. I always wanted to be a very fast runner. They get a bad rap. They feed on schools of migrating Mullet, which swim near the shore, near people, which can be scary. I would show people I am not that scary.

Is there a woman in conservation that has inspired you? A renowned marine biologist named Sylvia Earle, one of the first prominent women in this field. She showed that women could scuba dive and do field work. She helped President Obama create the marine reserve in Hawaii and is a great voice for the ocean. She is still doing work at age 81.

What do you do in your personal life or time that connects you to your work in conservation? I am vegan for environmental reasons. I would say eat less meat, even if it’s no meat for a whole day that’s awesome.

Do you have a motto or a phrase that you live by? “It’s nice to be important, but it’s more important to be nice.” You might not get a chance to be a hotshot in conservation, but you are still important to others and to the world.

What advice would you give to a young person wanting to have a career in conservation? To have patience. It is a tough field and physically demanding. Stay happy. You can’t give up even when there are negative people and lack of jobs. Reach out to organizations and professors. Stay in touch with the first internship you have and make connections. Send thank you email and notes and join LinkedIn.