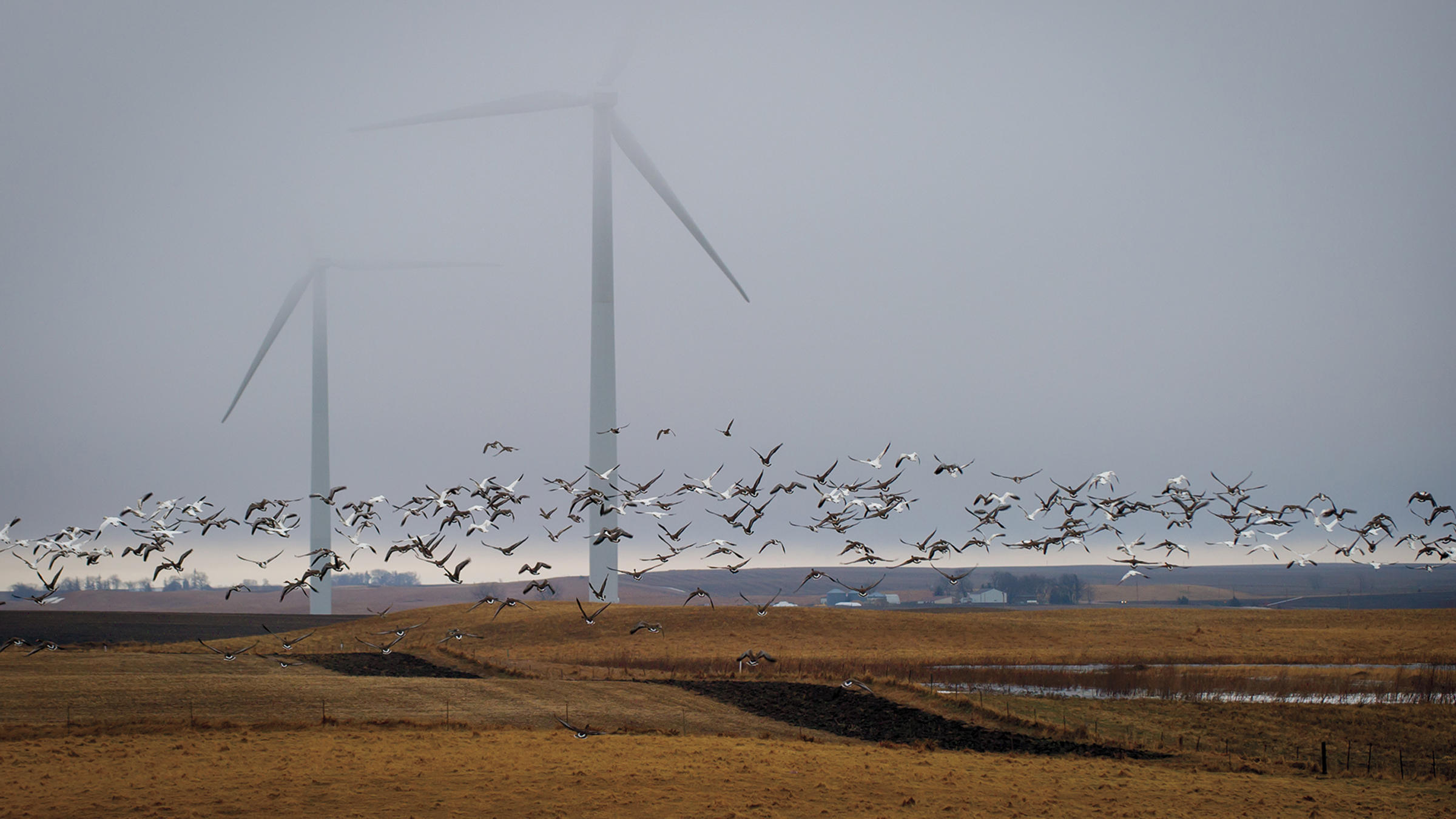 Audubon’s scientists have determined that climate change is the greatest threat to birds. Birds are vulnerable to subtle changes in their environment, such as availability of food, water, and habitat, which can cause them to shift or lose their ranges. Our peer-reviewed research shows that 314 species — roughly half of all North American bird species — are threatened with the loss of at least 50 percent of their current ranges by 2080.

Audubon and other leaders in the science and conservation space agree that in order to help prevent species extinctions and other catastrophic effects of climate change, we must reduce carbon pollution as quickly as possible. This will require us to rapidly increase energy efficiency, expand energy storage, modernize transmission capabilities, and accelerate the development of renewable energy.

Investing in renewable energy, like solar and wind, will help to reduce carbon pollution and protect birds threatened by climate change. Audubon strongly supports the development of renewable energy projects and technologies that avoid, minimize, or effectively mitigate negative impacts to birds and their habitat.

More than 1 million homes across the United States now run on energy generated by rooftop solar panels, 1,294 MW of community solar have been installed, and more than 6,000 solar projects over 1 MW are in operation or development. That’s great news for all of us — and for birds, too.  With solar power more accessible than ever, many people can now do their part to transition to cleaner sources of energy at home, and save money on electricity bills in the long run.

Utility-scale Solar. Utility-scale solar installations place many solar panels in a single location to generate electricity for utility companies, which then distribute that power to its customers. While these large solar sites play an important role in our transition to clean energy, it’s vital for developers to minimize harm to wildlife by carefully considering the placement of these installations. Solar installers should avoid siting installations in areas that provide habitat, food, or water for threatened or endangered species, especially grassland birds.

Stabilizing grassland bird populations has been identified as a conservation priority by virtually all bird conservation initiatives, groups, and agencies in the northeastern United States due to concern over their declines. As a group, grassland birds have declined more than any other group of birds in this region and across the country in the past 50 years.

Utility-scale solar can negatively impact grassland birds by breaking up grasslands and creating disruptions that affect the behavior and reproductive success of highly sensitive species, such as the Upland Sandpiper, Henslow’s Sparrow, and Grasshopper Sparrow. Solar developers can prevent or mitigate these harms by not siting projects in high-value habitat and by using best management practices to improve existing habitat and eliminate disturbances to nesting grassland birds and wintering raptors on the sites of solar installations.

Distributed Solar. New York State should pursue and incentivize distributed solar and other behind-the-meter resources wherever possible. Solar panels that are installed on rooftops, brownfields, capped landfills, parking lots, and other man-made structures ensure that the greatest amount of habitat is left undisturbed. However, community solar has the potential to result in negative impacts that are similar to utility-scale solar and we recommend that developers of these projects also use best management practices for grassland birds and other species of sensitive wildlife.

Audubon strongly supports wind power as a renewable energy source that helps reduce the threats posed to birds and people by climate change. If the United States obtains 20 percent of its electricity from wind power by 2020, it will reduce greenhouse gas emissions equivalent to taking 71 million cars off the road or planting 104 million acres of trees. However, we also advocate that wind power facilities should be planned, sited, and operated in ways that minimize harm to birds and other wildlife by avoiding migration corridors and critical habitat, and employing technology and practices that reduce bird collisions.

Offshore Wind in the North Atlantic and Mid-Atlantic. Offshore wind is a relatively new technology in the United States and we need to closely monitor its impact on marine wildlife and the ocean ecosystem. Offshore wind can and must be developed thoughtfully and responsibly, using science-based measures to avoid, minimize, mitigate, and monitor impacts on valuable and vulnerable wildlife.

Wind farm construction and operation can displace vulnerable birds from prime feeding and breeding areas, interfere with their migration routes, and poses a risk of collision. We can minimize these impacts by putting specific measures in place to protect our most vulnerable species and by monitoring pre- and post-construction so we can actively adapt as we better understand the impacts on birds and other wildlife.

Audubon advocated for the inclusion of environmental guidelines in the New York State procurement process for offshore wind and provided technical expertise that will help minimize threats to birds and other wildlife by ensuring that turbines are properly sited and monitored. We will continue to work with the Public Service Commission and NYS Energy Research and Development Authority to refine these guidelines and promote the adoption of best management practices for the construction and operation of wind turbines in New York State’s coastal waters.

Offshore Wind in the Great Lakes. The Great Lakes are the largest fresh water system on earth and support millions of migratory birds, which depend on aquatic and coastal habitats for shelter, rest, and nourishment during spring and fall migrations and the winter months. Since many bird species that are already in decline rely on the lakes for habitat and other resources, it is critical that we take a measured approach to the development of offshore wind in the waters of Lake Ontario and Lake Erie, and ensure that migratory birds are not impacted negatively.

Offshore wind in the Great Lakes can result in direct impacts to birds by causing collisions, which may occur when birds are forced to fly lower due to inclement weather, seek out turbines as a place to roost, or are attracted to lighting placed on turbines. To reduce these impacts, wind developers should minimize upward-facing lighting, use colors of lights that are less attractive to birds, adjust the pitch and speed of turbine levels, and adopt new approaches should they be proven effective. We also recommend that developers conduct impact assessments before and after construction to ensure that impacts to vulnerable birds are minimized to the maximum extent possible.

Additionally, wintering ducks, grebes, mergansers, and other waterbirds may be displaced by the presence of turbines. More study is needed to determine the impacts to these species and to develop best practices and mitigation strategies.